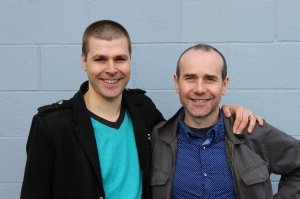 For the longest time this page was simply Who am I.  Well now that my partner has officially been added to the team, the question now becomes Who are We?  More importantly, how the heck have we ended up at this point where we are starting a brewery in Vancouver!

Officially we are Iain Hill and Aaron Jonckheere, but that doesn’t necessarily mean much to you. What really matters is what has transpired in our lives to risk our own money and time to follow a passion?  Well like most people who follow a dream, it started from an early age for both of us.

For Aaron it is pretty simple.  He loves beer, as he was raised on beer, and it runs in his family.  His grandfather came to Canada from Belgium in the 1950’s, and was immediately struck by the lack of quality beer.  As such, he wrangled up all the pieces necessary to be a home brewer, and started making his very own beer.  Aaron can remember seeing all his grandpas brewing equipment and being strangely interested in what was happening.  Eventually his grandpa taught his father to brew beer, and then his Dad eventually taught Aaron to brew when he was barely 16.  Aaron would help his father with various stages of the brewing process (depending on his attention span at the time), and they still brew together to this day.  So opening a brewery is really the culmination of a lifelong genetic and habitual passion for beer.

As for Iain, he has been part of the craft beer scene in Vancouver for about 20 years.  Iain first fell in love with the idea of brewing at University, where he was trying to decide what he was going to do with his degree in Biochemistry.  A career in a lab seemed boring, and life working for a big company seemed strangely wrong.  So Iain ended up landing a job at the independent brewer Shaftebury, where his passion for beer really became entrenched.  Within a couple years, he started working at Yaletown Brewing Co. where he has spent the past 18 years of his life, refining and plying his trade as a Brewmaster.  Iain has always enjoyed the interaction and intimacy a brewpub provides, as he was able to engage with consumers.  This connection with craft beer drinkers motivated Iain to brew a wide variety of beer styles, resulting in a deepening passion for both Old World and West Coast beers.

It was about 2-1/2 years ago that Aaron and Iain met, and discussed their passion and their interest in beer.  Friends first, the 2 talked about what they loved and what was next in their lives.  Eventually this friendship turned into what you are reading and seeing today.  The start of a brewery and the fulfilment of a dream that both have long waited for.

I hope you like the information you find here and I look forward to hearing from you.  If you prefer, you can email us directly at startingacraftbrewery@gmail.com.  If there is something you want written about, or other information want us to discuss, please send us a note and we will put our thoughts on paper.  Thanks for checking in and I hope we can share a beer sometime.

All My Blog Posts